One of the things we teach our kids is when someone chooses to trust Jesus there’s a celebration in heaven.

So we made party hats.  It’s just a simple strip of poster board, but it was fun to decorate. 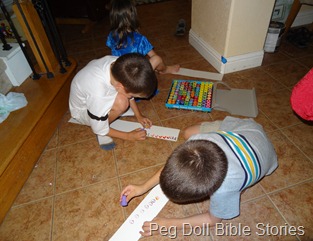 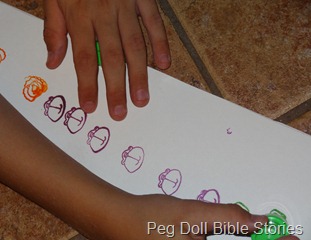 Afterwards we had a party!

David, a man after God’s own heart 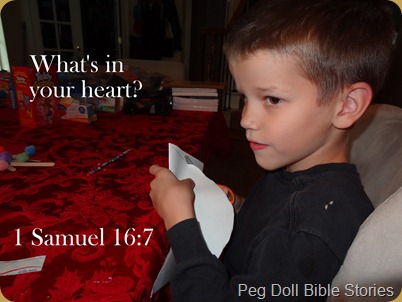 After reading the story of David’s anointing, we drew a map to our own hearts. 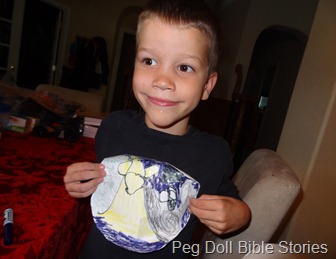 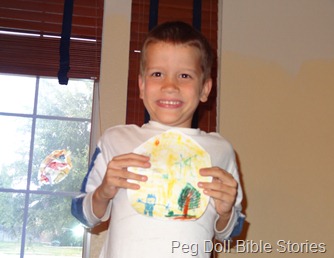 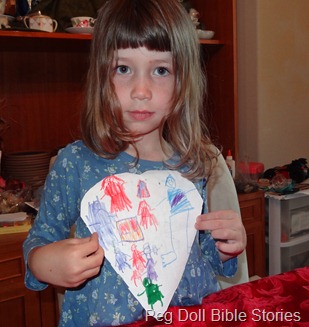 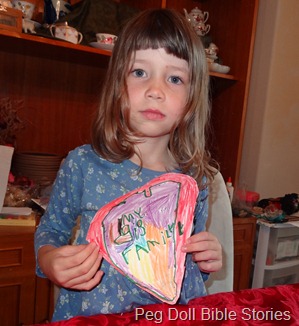 Email ThisBlogThis!Share to TwitterShare to FacebookShare to Pinterest
Labels: 1 and 2 Samuel, Old Testament

Our church  Kids Clubs a few weeks ago.  One of the days of clubs was the story of Jesus and all of the amazing things he did.

With the pre-schoolers we talked about how Jesus could heal the people without using medicine or band-aids, just by talking Jesus was able to heal them.  He healed a man who couldn’t walk by saying “Get up you are healed.”  He even told a dead man to come out of his grave!

But, we can’t do that, we need band-aids, so we “healed” our friends, with band-aids. 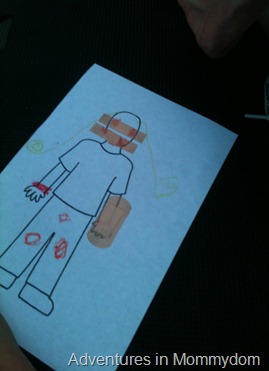 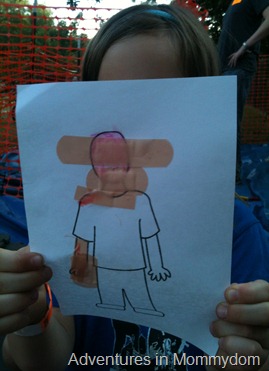 There were a lot of “owies.”

After we played a game.  One person laid down at the end and was hurt.  The first person in line would run over, hug them and heal them, then lay down and pretend to be sick.

This was wildly popular, but rather crazy, so no pictures of the game.

Putting this site on hold for now

God’s been telling me not to spend my time here, and as much as I want to keep doing these, I don’t feel I should be trying to post regularly here.

I will probably put up stories as I get them acted out and pictures taken, but God has been quite clear that it is not supposed to be something I do on a weekly basis or feel like there is an obligation.

So, until further notice, I’m not gonna be putting a new post up here.  Hopefully whatever I’m supposed to be working through will get worked out, but if not, it’s all in God’s hands. 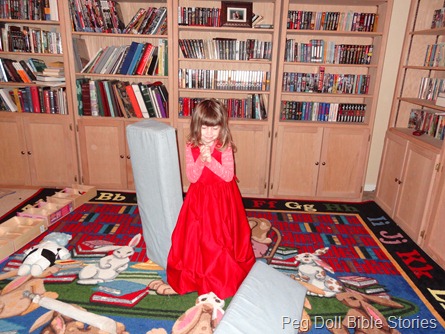 Samson was a strong guy.  We all know that, we’ve read the stories.  We act out knocking down things, but at the same time he was incredibly weak.

Samson had a weakness for women, and he didn’t run from it. 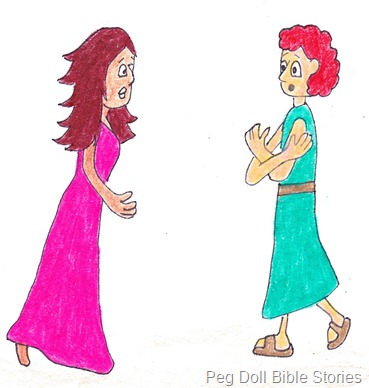 Samson didn’t run, or at least not away.

And ultimately that’s why he fell, because he didn’t trust God, he trusted his strength.  He thought he could fight his way out of anything.

But can we?  If God is on our side, we certainly can.  We see that over and over again in Judges.

But, Samson was the most gifted Judge, he had strength, he had the right upbringing, but ultimately God couldn’t use him as mightily as he did many of the other Judges.

What is the difference?

To me, it’s attitude and heart.  Samson only called on God when he HAD to.  “God I’m dying of thirst, give me water.”  “God, I want revenge for my eyes, help me knock this down.”  Even those prayers are about Samson.

Gideon, on the other hand talked to God constantly at first, and look at what he did.  He destroyed an entire kingdom.  What did Samson do?  He killed a few thousand people.  It says in Judges 16:30, “he killed more when he died, than while he lived.”  What a sad epitaph.

I hope to be remembered like Gideon or Deborah, or Othneil.  God used them mightily even if they had great weakness.  I want to be mightily used by God.

So, what’s your choice, which Judge do you want to be? 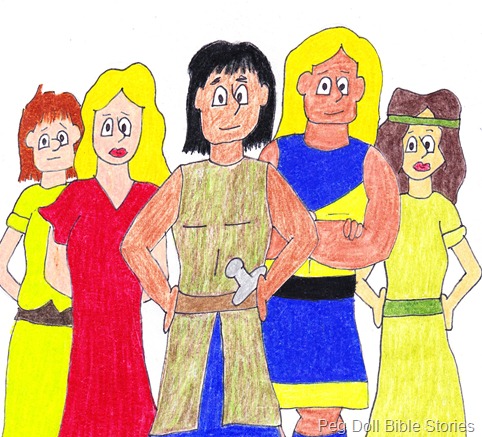 PS: I’ll get Gideon up soon, I went out of town and discovered I didn’t have the pictures I wanted for the story.  Soon to follow after is Ruth. 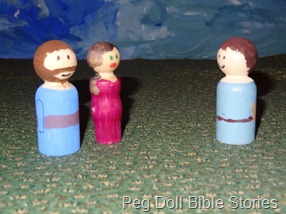 Once there was a couple who had been married a very long time.  They wanted kids very much, but weren’t able to have them.  One day an angel appeared to them and said they were going to have a baby who was going to someday judge Israel. 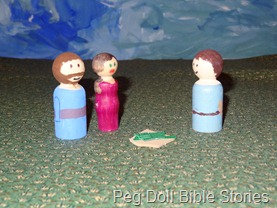 They asked the angel, “How should we raise him?”

“He will be a Narazarite from birth.  He must not cut his hair, drink wine, or touch anything dead.”  After they offered a meal to God, the angel disappeared.

Their baby was born, a fine baby boy, and they named him Samson.  Samson grew up to be a strong and handsome boy, but he had a weakness.  He liked to kiss Philistine girls, and God had said only to kiss and marry Israelite women. 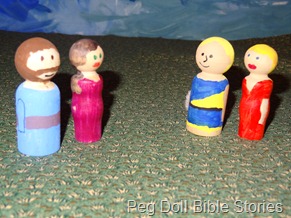 One day Samson came home and told his parents he was going to marry a Philistine girl, they weren’t happy, but they arranged the marriage.

As Samson walked to the wedding he saw a dead lion with a beehive in it and gathered some honey. 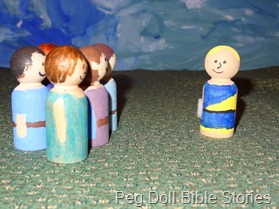 He shared the honey with everyone at the wedding and said, “I have a riddle for you, if you can’t guess it you’ll give me 30 outfits.” 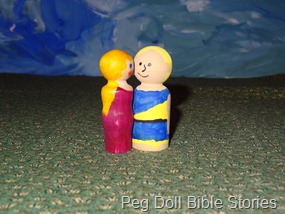 The guests came to Samson’s bride and said, “Get us the answer or we’ll kill your family.”

Finally he did, and she told them the answer. 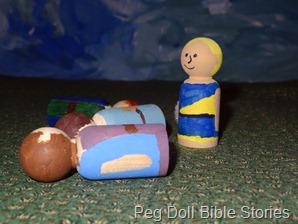 They told him the answer and Samson got so mad.  “Very well, I’ll get your clothes.”  So he went out and killed 30 Philistines and took their clothes. 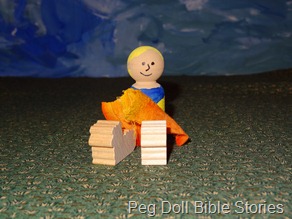 Some time passed and Samson wanted to go with his wife, but he found out she was now married to someone else.  So he got mad and took 300 foxes and tied their tails together and set them loose with torches.  He burned up their fields and their towns. 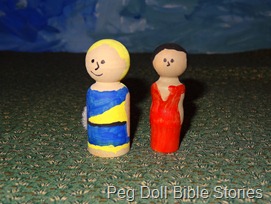 Time passed and Samson thought he was in love again.  This woman was named Delilah.  The men in the city came to Delilah  and said, “Find out what his weakness is and we’ll pay you.”

So she started pestering Samson to tell her what was his weakness. 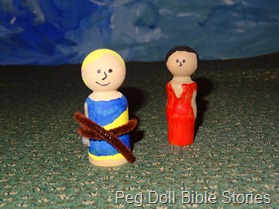 She bothered him so much and for so long that finally he said, “If you tie me up with new ropes I will be as weak as anyone else.”  So, she tied him up and said “Samson the guards are coming!”  He got up and tore the ropes out. 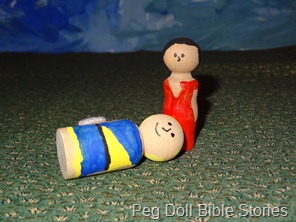 She sobbed and sobbed at Samson, “You don’t really love me or you’d tell me the truth.”

Finally he couldn’t take it anymore, “The secret of my strength is my hair.”  So, she lulled him to sleep and shaved his head.  This time when the soldiers came they poked his eyes out. 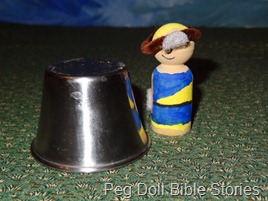 They set Samson to grinding grain and making him work like he was a donkey. 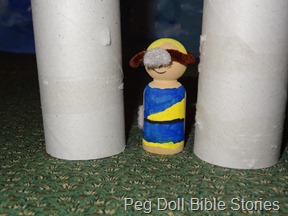 One day they were throwing a big party and they wanted Samson to amuse them.  They brought him over, and he danced for them.  Finally he told a young boy he was tired and went over to the pillars.  He said one last prayer to God, “Please let me get revenge for my eyes.”  He pushed as hard as he could.

When the dust cleared, the temple had fallen and Samson with his last act had killed more Philistines than he had in his whole life.

Email ThisBlogThis!Share to TwitterShare to FacebookShare to Pinterest
Labels: Judges 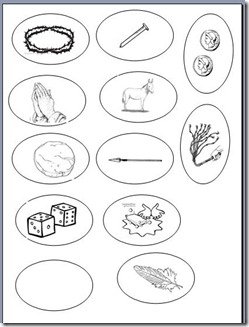